Let me back up. In a fashion unheard of for us, Josh and I made fantastic time this morning. Dropped off the kids, stopped at Target, and got to my friend's house for our airport ride 20 minutes ahead of schedule. A quick ride to the airport later, we were checked in just after 10:30 - three hours ahead of our 1:25 flight to JFK.

We had a nice lunch at TGI Fridays before heading to our gate. The plane boarded quickly and smoothly, and I debated exactly how many life-size Easter Island heads I could order from Sky Mall for Jeff and Diane's garden.

Right on cue: "Ladies and Gentlemen, this is your captain speaking, we have a problem with an engine, and we're not sure if we can fly this plane or not, but we may be switching to another or fixing it. Either way we're looking at a delay of at least an hour."

Our time between flights at JFK was an hour and a half.

Two minutes later, we were informed that an engine was out and "this bird isn't gonna fly." (yes, that is a direct quote). The flight crew instructed us to return to the airport gate and await further news.

A Delta service representative assisted us in getting set up on a new flight - first a non-stop to London that left at 9:45 pm. Despite our overwhelming joy at the thought of sitting at MSP terminal 1 for another 8 hours, when they gave us the option to take a flight to JFK at 3:25 with a flight to London at 9:00 pm, we took that option.

We'll land in London tomorrow at 9:30 am instead of 7:00 am, which will work in our favor avoiding rush hour on the London subway system.
Posted by Victoria at 2:57 PM 1 comment: 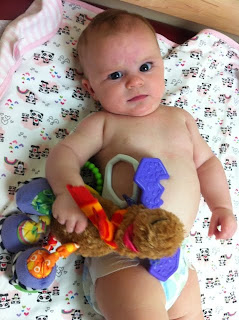 Haley's four-month check up was this afternoon! She is 25 inches tall (75th percentile) and weighs 14 pounds 4 ounces (70th percentile). Her pediatrician still calls her "the dream baby."

Her shots made her cry, but once we got in the car she fell right to sleep, and has spent much of the rest of the day sleeping. 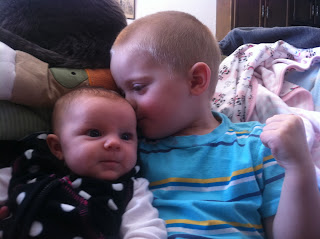 Haley had a slightly belated two-month check up today. She actually turned two months back on March 16 but due to some scheduling conflicts, we couldn't get her in until this week.

She is now 22 1/2 inches tall and weighs 11 pounds, 15 ounces. This places her in the 50th percentile for both height and weight for her age. She is 100 percent healthy and absolutely perfect!

Haley also had her first round of vaccinations today, which left her poor little legs very sore afterward.

Posted by Victoria at 1:32 AM No comments: 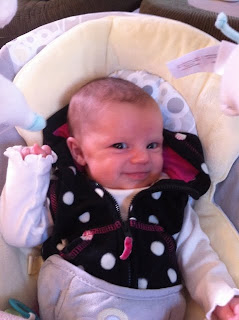 Haley had her one-month doctor appointment on Thursday. Her doctor called told us we had "the dream baby" (we knew that already of course).

She's growing super fast, and sweet as ever. She smiles a lot too now :)

Tomorrow we will go to the doctor for her one month check-up. I am excited to see how big she is! Hopefully the infection in her right ear will have cleared up too.

In this picture, Haley is sleeping in her new bouncy chair. She had been using the same one we had from when Ridley was a baby, but I thought it would be nice to get her a new one for downstairs. The old one we are keeping upstairs now, so I don't have to keep carrying it up and down the stairs all the time! (having a coupon for 20% off a new one didn't hurt either... How I love Target).

Baby furniture building directions always seem to confuse me, and this one was no exception. It may have taken three tries, but I did get it together on my own!

There has been an evil bug going around our household this week. It started last Tuesday, when Ridley woke up from his nap clearly not feeling well. His eyes were puffy and his nose was running. It seemed the minor cold that had plagued him most of November and December was back. Then on Wednesday, he got worse. I took him to the Target Minute Clinic and he was diagnosed with his first ear infection - a double ear infection no less.

We started him on amoxicillin and even the next day we could tell he was starting to feel much better. He continued to improve over the weekend, during which time I was dealing with some sort of bug, but mostly better by Sunday.

Since she was born, Haley has had some minor congestion, which is fairly common, and it was never bad enough to bother her. But Sunday evening it seemed to be getting worse, so I called our pediatric urgent care office, who advised us to run a humidifier in her room at night (check), take her in the bathroom and run the shower on high heat so she could breathe in the steam (check), and to do some saline irrigation in her nose (check, after they explained how to do it). Well, all those things didn't do much in the way of helping, and I spent almost all night up with Haley as her congestion got worse - to the point that she was having difficulty eating.

So first thing this morning, Haley and I were off to see her pediatrician. Turns out, Haley has her first ear infection (just in her right ear though). Her doctor says that in 15 years of practice, she can count on one hand the number of babies under six weeks old who have had ear infections. So now we have her started on amoxicillin as well, and her congestion seems to be improving. She is finally getting some sleep too. 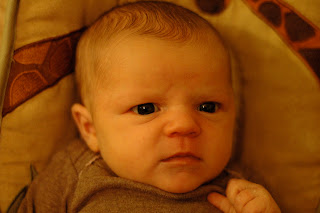 Now hopefully between these two sick kids (and a sick husband) I can get a little sleep too.

I took Haley in for her weight check on Monday, January 24. Her weight was up to 7 pounds 12 ounces - a gain of six ounces in only four days!

After the weight check, Haley and I stopped in at Punch to visit daddy at work before going to pick up Ridley. Haley slept through the whole visit :)
Posted by Victoria at 12:29 PM No comments: